However.  My goal was always to do better then my last competition  Which means for me, do better, feel better and look better.

Results posted for the bikini category.  Master’s only qualifies the top 3 for elite.  And the top 5 for open.  and…. I came in 5th out of 12th for Master’s.  May seem odd but 5th in bikini means more to me then 3rd in fitness.  YAY!

Showdown took place at Centenial Hall right here in good old London Ontario.  I do not work on Fridays and I spent the day limiting water, getting my nails done, and getting spray tanned for the competition.  For a tan this time, since I am always looking for a way to keep on Budget rather than do the traditional Competition Tan, I bought a bottle of Pro Tan overnight competition tan.  This stuff is amazing.  I began on Wednesday night by applying a coat, did the same Thursday night and then went for a regular old spray tan on Friday afternoon.  The other half took the kids to the race track Friday night, and I headed to the athletes meeting.  There were ALLOT of competitors in this show.  My guess is well over 100.  So, it was jammed, and moved incredibly slowly.  Suggestion:  Allow people to fill out their waivers, and bio’s online and give out the Goodie Bags at the show, perhaps during the 9 am meeting?  Standing around for 2 hours dehydrated but having to pee and throwing off you’re meal schedule the day before the show is not a lot of fun.  Either way I met some great people again.

Friday night I barely slept, too excited, feeling fabulous and just generally wound up.  Got up at 5 am and put curls in my hair, Alysia of AM Pro Makeup Artistry came to the house just before 8 am and I can honestly say she is absolutely amazing!

Was supposed to be at the venue for 9 am, but the athlete meeting pre-show never happens when they say so I didn’t miss it even though my hair wasn’t done yet and I was running behind.  Totally lost my brain Saturday morning and forgot to bring my competitor numbers as well as the memory card for the camera.  Not that it matters, the other half isn’t keen on taking my picture apparently.  He got some good shots with his cell phone I suppose and I even talked him into 1 whole picture with me. 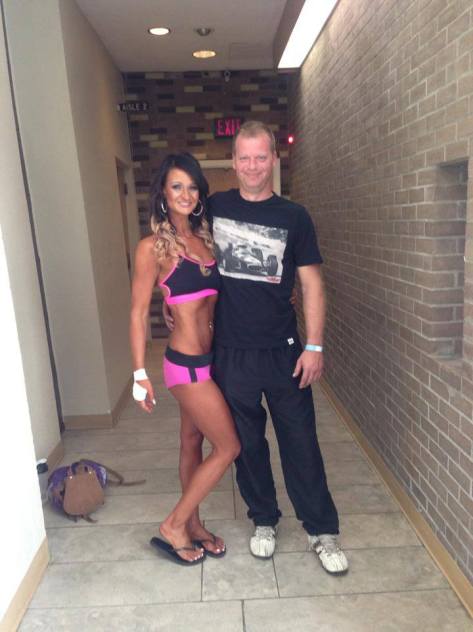 I competed in Masters Fitness Model and Masters Bikini.  I felt amazing.  However I rushed my bikini walk as its the first time I have been on stage for a year and regardless of all of my practice I got nervous and zipped through my walk.  My Bikini round of fitness model went really well, the judges were paying attention, I felt confident and fit.  Sports wear for fitness model, I had pink boxer bottoms (seen above) that were riding up and I tried to utilize bikini bit to ensure I was showing the goods on stage, instead just ended up with big dark glue marks on my hiney.  I had been prepared and brought another pair of bottoms, however they had fallen out of my bag and before stage time I could not find them for the life of me.  (I wore them at the evening show).

Pre-judging done, we went home and I could have gone straight to sleep.  However an hour later I was back at the venue for pictures with Chris Linton Photography  He was amazing to work with, I have not seen the photo’s yet but I am waiting on pins and needles.  They were taken outside of Centenial Hall in the court yard.  Lets just say you get some crazy looks from people when you’re wandering around at 2:30 in the afternoon downtown in a hot pink bikini and clear stripper heels!  It was so much fun and I can hardly wait to do another photoshoot.

After that I had about enough time to go home, have a glass of vino, feed the kids, and head out to the evening show. 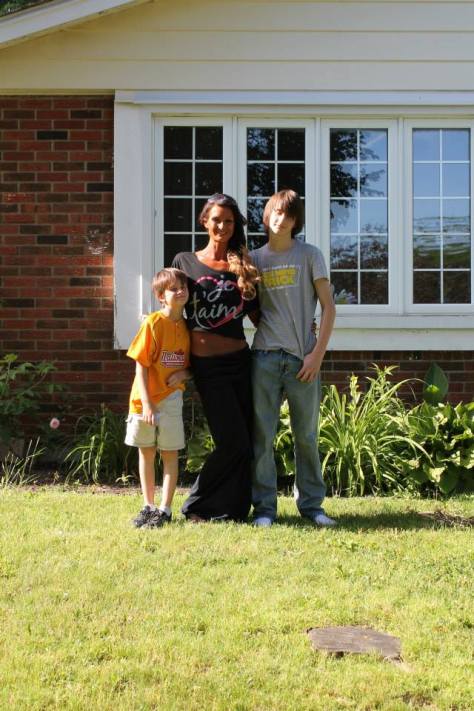 Evening show was so much more fun than the morning, everyone was having fun.  You relax, the judges have made their decisions.  I spent all day having complete strangers telling me that I had this.  I felt like I had it.  Masters fitness model was called for awards first.  And I got 3rd!  Yes very excited and suprisingly very dissapointed too.  I really thought I HAD this.  All that work.  However and some won’t like that I am posting it.  I don’t think I get brownie points for being my own trainer, or for not being part of any of the “teams”…  I also have no sponsors, no idea how you get them either.  So, yes I am now a UFE Elite Fitness Model.  Bikini masters I have no idea where I placed because they only called top 5 and have’nt posted results yet.  Not so upset about bikini even though I thought I came through on my phyique and my quarters turns, but I screwed up my T-Walk (nerves!)

After asking for advise and speaking to a few I have made the decision to hire a well known trainer.  Not announcing it yet, as I still have to figure out how and send them funds.  Announcement coming soon!  This should deal with the No Trainer and no idea how to promote myself issue.

Still at it.  Hardcore.  I want to compete again in the fall and I want to win.  First place please and thanks.  So, still going hard.  Took 2 days off right after the competition and schedules with the kids starting summer has been a little chaotic however I am dedicated to my workouts and my lifts are coming back up.

Oh how I missed food.  Regardless of my best intentions I jumped two feet off teh diet right after the show.  I have eaten and drank to my hearts content.  That’s gotta stop or all that hard work is right out the window.  Competition weight is not do-able year round with a job and a life however I do not want to go back up to my starting weight 12 + weeks ago of 143 either.  Seeing as I want to compete possibly october and definitely november that means its gotta stay relatively clean.

So, I need to make the decision as to what color suit I am going to wear.  My first competition I wore a lovely gold suit from www.suitsyou.com  I loved this suit, but I also knew I was taking a risk wearing it, unfortunately it did not pay off and it washed out on stage.  My second competition last years UFE Showdown I created my own suit which was bright yellow and blue.  I LOVE this suit.  It was different, colorful and a one of a kind.  I have also created a black one with some help of my sewing machine which I may wear for one of the bikini rounds at Showdown this year.  However since I am going to compete in both bikini and fitness model this year I have decided to invest in another suit.   A new one.  I am trying to go with the crowd a little this time and have looked at a tonne of pictures of what others are wearing this year, and last and what looks good with darker hair. Blue and purple are always popular, however they are two colors that I just do not like.  I have narrowed down my choices to pink, red or green.  So, help a girl out.  What would you pick for me

Some Mom's lift more than just their kids…